Result:
One fun-filled day where I felt entirely inadequate and pissed off multiple people.  Hooray! 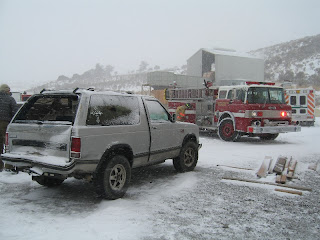 Before:  One moderately crumpled practice vehicle, complete with no less than 3 Jesus stickers (my fave: it's the 10 commandments, not the 10 suggestions), plus one engine, one ambulance. 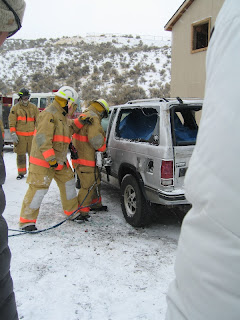 Doors coming off:  Chief & Deputy had some fun getting the doors to pop.  Apparently when it's a cheaper car it's tougher.  The screams from the three under the tarp were priceless, though.  Fire Dept. probie got to punch all the windows and it scared the crap out of them. 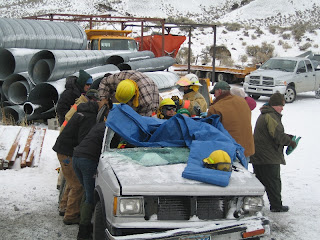 We practiced spinal restriction & extrication with doors on, doors off, and roof off.  This was toward the end of the day when the snow finally stopped.

Had a good debrief with the fire crew on site, then did EMS debrief back at the classroom.  I learned a lot of things about myself, I think.  I have a hard time being a support person - I tend to take over when things aren't going the way I think they should.  I talk too much, and too loud (happens when I'm under stress, so this is tough for me to break).  When I'm not the in-charge, I need to zip my mouth unless I see something unsafe.
There is a line somewhere between being a good leader and being a pain in the rear.  I firmly jumped over that line with both feet.  Not good.

Coming next: TB Tests, Trauma written test, and beginning special populations.
Posted by AmbulanceRanger at 11:34 AM