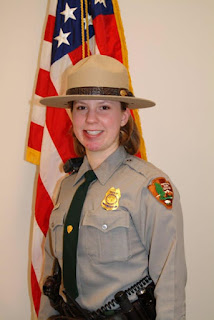 It is a sad time for all park rangers.  My heart goes out to her family.
Ranger Margaret Anderson, 34, was shot and killed on the road to Paradise at Mount Rainier National Park on New Year’s Day morning. The body of her assailant, Benjamin Barnes, who fled into the backcountry, was found by searchers yesterday afternoon.
The intensive manhunt for Barnes came to an end when searchers in an aircraft spotted a body lying face down and partially submerged in the Paradise River in the vicinity of Narada Falls. Searchers on the ground traversed challenging terrain to reach the spot and confirmed that it was Barnes and that he was dead.
An investigation into the incident is being led by the Federal Bureau of Investigation with park rangers and Pierce County Sheriff’s Department officers assisting. The Western Incident Management Team (Denny Ziemann, IC) is en route to the park to assist with planning a memorial service for Anderson and with ongoing park needs. Information on the service will be posted on InsideNPS once it becomes available.
The park will remain closed to the public through today to let staff begin to work through their grief.
On the morning of January 1st, Anderson set up a traffic block to intercept a vehicle that had failed to stop at a chain-up checkpoint. The driver, Benjamin Barnes, opened fire on Anderson, killing her, and then fled on foot into the woods. Anderson had worked at Mount Rainier for three years. She is survived by her husband, Eric, also a ranger in the park, and by two young children.
Mount Rainier National Park closed during the hunt for the gunman, with the park evacuating park visitors to get them out of potential danger. There were 125 visitors in lockdown at the Paradise Visitor Center from Sunday noon until 3:30 a.m. on Monday. They were escorted out of the park in small groups of five vehicles, accompanied by law enforcement officers. There were also 25 visitors at the National Park Inn at Longmire who were evacuated out of the park. Visitors had been held at these locations for their own safety.
Approximately 200 personnel were involved in search operations on Monday, January 2nd. Agencies participating in the search effort included the National Park Service, Pierce County Sheriff’s Department, Federal Bureau of Investigation, Tacoma Police Department, Washington State Patrol, Customs & Border Patrol, Department of Homeland Security, U.S. Forest Service, Pierce County Fire Districts, Lewis County Sheriff’s Department, Enumclaw PD, Portland PD, Seattle PD, Snohomish PD, and law enforcement officers from other jurisdictions as well. Resources included K-9 units, armored vehicles, helicopters and fixed-wing aircraft.
Director Jarvis issued this statement early on Monday morning:
“Yesterday morning, Park Ranger Margaret Anderson was shot and killed while making a traffic stop at Mount Rainier National Park. As I write this late Sunday night, the murderer is still at large in the park, which has been closed. We are working closely with the FBI and local law enforcement to protect visitors and staff and to track down Margaret’s killer and bring him to justice.
“This is a heartbreaking, senseless tragedy. Margaret was just 34 years old. She and her husband Eric, who is also a park ranger at Mount Rainier, have two young children. Margaret was killed while doing her job – protecting the visiting public on one of the park’s busiest days of the year.
“Last week, we mourned the death of U.S. Park Police Officer Mike Boehm, who suffered a heart attack while responding to a serious incident in Washington, DC. Mike left behind a wife and a son.
“Our hearts go out to both families, and I ask you to keep them in your thoughts and prayers in the hard days ahead.
“As updates from Rainier are available we will share them with all employees through InsideNPS. These losses are painful reminders of the risks faced by National Park Service employees every day. Please be careful out there and watch out for each other.”
Posted by AmbulanceRanger at 1:57 PM